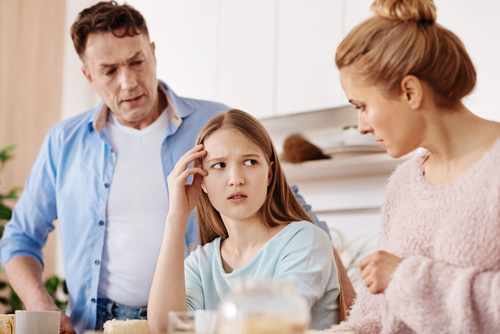 An addition to the Guru Circus Store is my 1:1 Online Coaching Session on Parenting With Confidence. As an introduction to that session we thought it would be helpful if I told you about the book the session is based on.

Parenting a Violent Child, was written by myself and a colleague, Islay Downey, after recognising the lack of support for families that are experiencing Child To Parent Violence. Please don’t be put off by the title though; there is a lot of material in it that will help most families.

The book follows 6 parents, as they explore what is within their power to change and what is not. It documents how they deal with the situations that they face in their family life. You, as the reader, are encouraged to make links to your own situation, which will give you the confidence to make changes. It is quite easy to pick up a magnifying glass and identify the problems that your child brings to your life. What we ask is that you pick up a mirror, look into it and see how your behaviour is contributing to the situation. By showing how this would be discussed in a parenting group our aim is to help you understand your own behaviour and your child’s behaviour.  The message from the book is that there is hope.  Hope brings opportunity for growth and new patterns of behaviour, which can lead to:

Parenting is one of the hardest jobs, it can be both rewarding and exhausting. It can leave you feeling lost and confused. Our experience of working with families suggests that these things can help;

The chapters in the book are a mix of teaching and sharing of experiences. This excerpt is from Chapter 7 which is about communication featuring four of the parents Paris, Margaret, Martin & Anne.

Listen out for feelings. Try to put yourself in your child’s shoes and think about how they may be feeling.  Ask your child `what is it like for you?’

Islay and Kim were interested to see how the parents had coped with all the information they had been given last week. In the weekly phone call there were reports that the children seemed puzzled by their parent’s behaviour.  They were confused as their parents were dealing with things differently. The older children noticed that their parents were changing and at times had become even more challenging.

The group returns for the weekly session and after making themselves a hot drink they sit down to hear what has happened in the week.

Kim: Would anyone like to tell us how their week has been and how they have got on?

Paris: I felt really embarrassed about telling you what I did last week but Kim when you said I was incredibly brave that made me feel better. It has been a tough week for me and to be honest I have struggled. I told Riley that he needed to take responsibility for himself and that I would support him but not rescue him anymore.

Martin: That sounds amazing. How did he take it?

Paris: He didn’t really say anything. I did think about writing it down and giving it to him in a letter but then I decided it was better to talk to him. I have the parenting group to thank for that; it has given me confidence. He’s been a lot quieter since then and I haven’t had any problems with him. I think he is worried and I’ve noticed that I keep getting sucked in. I want to make him feel better by saying “Don’t worry, it’ll be alright’ but I keep hearing Islay’s voice saying ‘What will you teach him?’ and I manage to stop myself just in time. I’ve realised that he needs to experience this horrible feeling.

Martin: That sounds a bit tough.

Paris: I know it does and I’m not sure how to explain it. But I have this horrid feeling all the time in the pit of my stomach and he does whatever he wants to do. I’ve realised that for him to change he needs to experience the same worry as I have been. It’s not me making him feel it; this is something he’s brought on himself.

Martin: I think I get it. Is it a bit like taking their PE kit to school so they don’t experience the detention?

Kim: Yes it is just like that. It’s much easier for children to experience this over small things like the PE kit and much harder when there is more at stake. Paris you have done a fantastic job with Riley, you were very clear and you have given him choices. You won’t be able to stop worrying about him; you love him and want what’s best for him. What you have started to do though is to change your behaviour and let him take on some of that worry. It’s not enough for you to want what’s best for Riley; he needs to want what is best for him as well.

Islay: What I think you are illustrating Paris is that by doing something different yourself you start to get a different outcome. How did anyone else get on last week?

Martin: I asked John if he wanted to go fishing. I have a friend who is always going fishing so I asked him if we could join him one day. It was so good, I’d never done it before and we both loved it. I spoke to the youth worker about it and there’s a charity that takes parents and children fishing so we’ve joined up and we’ve arranged it with the school to go for a couple of hours when Kyle is at nursery.

Islay: Martin, can I ask what John’s behaviour has been like since then?

Martin: Well in a funny sort of way it has been much better. I’ve realised that when his sisters have a go at him and he is about to have a go back at them I can distract him by talking about fishing. It helps to keep him calm, although sometimes it doesn’t work because he is easy prey for them.

Kim: Thank you Martin. I think this next skill will really help you all to get your message across to your children.

Kim: An `I message’ is a calm, direct way of communicating. It involves working out what you want to say, write it down if it helps, and then delivering it with belief in yourself. Practice this whenever you can:

Islay: Telling your children how you feel can be very effective. Can anyone give an example?

Margaret: I usually say to Damien ‘You never get up on time for school; I am fed up of telling you’. I guess he doesn’t want to hear that any more. I’m wondering whether I could say ‘Damien, I feel worried when you don’t get up for school, because it is important to get an education. I would like you to get up on time tomorrow’. What do you think?

Anne: For someone who doesn’t like to share her ideas I think you have done brilliantly. That sounds amazing.

Kim: One thing to remember is that our children want to please us. They don’t want our displeasure. Often all we tell them is what they are doing wrong so it’s really helpful to them when we can tell them what we want them to do and what they are doing right. It’s about encouraging them, not blaming them.

Islay: Would anyone be prepared to give the ‘I message ‘ a go this week?

Margaret: I’m going to change what I say to Damien about school.

Anne: I’m going to try and be honest about my feelings to my daughter Sophie and really work out when I am reacting emotionally.

Islay: That’s great everyone, we will see you next week.

Margaret was feeling hopeful as she took her coat from the back of the chair and slipped it on. After the last few sessions, which had left her reeling, this one had been ok. At home things were more comfortable too. Damien was more settled and she had stopped walking on eggshells to avoid conflict. As Margaret left the room she smiled at how much she was enjoying the group, it was so interesting to hear everyone’s stories and to see the changes they were making. Margaret wondered what she would do when the group sessions come to an end.

Parenting A Violent Child is published by Darton, Longman & Todd Ltd. Contact Kim through her Profile page with any parenting questions or sign up for a session at the Coaching Store.


Warning: Use of undefined constant publish - assumed 'publish' (this will throw an Error in a future version of PHP) in /home/customer/www/gurucircus.com/public_html/wp-content/themes/gurucircus/single-articles.php on line 82

Kim is passionate about self-awareness and personal growth. Kim will give you the time and space to focus on you; to be clear about your path, and to identify the steps that will move you towards your goals.

Author of the book ‘Parenting a Violent Child’.

If you've got something to say about personal growth, self-discovery or human potential, we'd love to hear from you. Whether you're a seasoned professional or just starting out, we're always looking for great content about what it is to be human.

Connect with our diverse, dynamic community, to share your thoughts and ideas on personal developments and how to improve your quality of life.

Stay up to date

Keep me informed about the latest Guru Circus news.